Welcome to the MedDerm Phototherapy Center

The MedDerm Phototherapy Center is one of the highest quality in Southern California. Various light therapies are available at MedDerm to treat a wide variety of medical disorders of the skin.

Phototherapy is the controlled delivery of artificial ultraviolet light. Ultraviolet light (a portion of the light emitted by the sun) is subdivided into UVA, UVB and UVC.

Narrowband UVB (NB-UVB) therapy is 311nm wavelength light that suppresses abnormal lymphocyte function in the skin. NB-UVB is thought to be superior to Broad Band UVB light exposure because narrowband light eliminates the most dangerous shortwave UVB rays. Those short rays are most highly associated with the induction of skin cancer.

Ultraviolet A-1 spectrum (UVA-1) is 340-440nm wavelength light (peak output is 370-390nm). UVA-1 is long-wave radiation that suppresses the function of the peripheral (skin) T and B lymphocytes. These are important immune cells, however, in many skin diseases they lead to dysfunctional immune reactions. Like the shortened UVB exposure of NB-UVB, UVA-1 also provides an effective therapeutic spectrum without the dangers of short wave exposure.

The following skin disorders can be treated with ultraviolet phototherapy. Approximate treatment times and number of sessions required are listed. Initially, treatments are given 1 to 3 times per week. These vary depending on the degree of skin involvement and with the skin disease.

Psoralen and Ultraviolet A Phototherapy (PUVA) combines the administration of psoralen (OxsoralenTM) with UVA light exposure 2 to 3 days per week. PUVA has been associated with an elevated risk of non-melanoma skin cancers and melanoma in psoriasis patients, and is not offered as a phototherapy at MedDerm.

Photodynamic Therapy (PDT) is effective for the treatment of actinic keratoses (precancers of the skin) and thin non-melanoma skin cancers (superficial basal cell carcinoma and superficial squamous cell carcinoma). PDT can also be used to improve acne vulgaris, sebaceous gland enlargement and large pore size. PDT is a two-step procedure that is done on an outpatient basis.

First a "penetration enhancer" (such as an enzyme mask and/or mirconeedling device) is applied to the skin. Then a photosensitizing medication called aminolevulinic acid (ALA or Levulan) is applied. It is selectively absorbed by precancerous and cancerous skin cells, as well as sebaceous glands. It is allowed to “incubate” on the skin for 45 to 120 minutes prior to exposure to therapeutic light (Blu-U). The skin cells that have absorbed the ALA photosensitizer are then “activated” to and destroyed via a photochemical reaction.

In some patients, both blue light (Blu-U) and red light (BBL) are used in combination to activate the photochemical reaction to remove background photodamage and rejuvenate appearance.

PDT can be uncomfortable during the Blu-U light phase of the procedure, which lasts around 16 minutes. Fans and pain medication are used in some cases.

The major side effect of PDT is temporary inflammation of the skin that appears as red "sandpaper" which can take up to 7 days to heal. It may take longer to heal if the treated individual is exposed to sun during the 48 hours following treatment. After PDT is performed, it is important to avoid exposure to bright light and/or direct sunlight to prevent excessive redness and swelling. Normal indoor lighting, television and computer exposure are fine. In some cases, two treatments may be needed to clear all precancerous lesions; the majority of lesions clear in one treatment. The results are often maintained for many years if careful sun protection is followed thereafter. 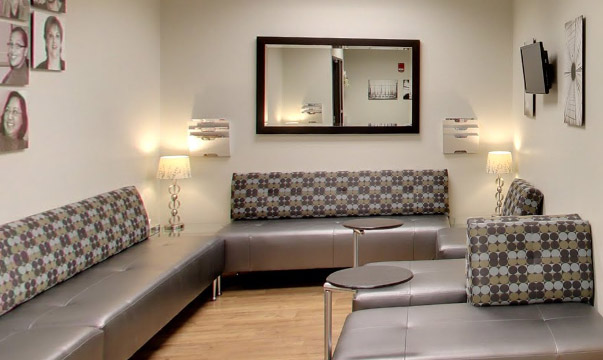